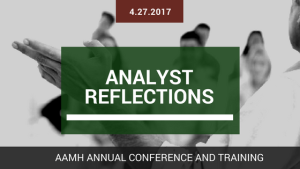 The American Academy of Medial Hypnoanalysis (AAMH) annual conferences are predominantly a clinical observation of an accelerated treatment model using age regression. As the treating therapist for the April 2017 conference, attempting a summary of the nine sessions of this rapid and intense three days that were packed with multiple sessions of hypnoanalysis was a challenge. Here I do my best to capture the process and my thoughts.

We begin with a vetted, volunteer patient that agrees to experience the intensity of nine sessions of the hypnoanalysis protocol in front of an audience of psychotherapists. The patient, a young woman from the area, expressed she was nervous at the beginning of the process.  There are several steps to the process: to start things off, we did a history intake; then the first hypnosis is a Word Association Exercise (WAE); followed with several age regression and reinforcement sessions.  Prior to each session, I inform the conference attendees and the patient about the process and then following the session demonstration lead a discussion of the session explaining what had transpired.

Remarkably, despite being in front of an audience, the patient went deeply into hypnosis. The history and WAE helped us formulate a subconscious diagnosis that helped guide what we were looking for in the age regressions and helped guide what new suggestions would be most healing. This is a unique aspect of hypnoanalysis. Rather than giving hypnotherapy suggestions directed at a general diagnostic category such as to reduce anxiety, depression, stop smoking, or lose weight, for example, we can find and then give suggestions that match the subconscious need. Even though this client was not especially verbal, she was able to tell me what was helpful and what was not. She could communicate what her experience was so we could target the subconscious problem.

There were age regressions to several different developmental stages, including a pre-birth regression. In addition, each age regression showed unique difficulties at that specific stage. We used a variety of psychological theoretical models including a spiritual approach, self-psychology, family therapy and even cognitive behavioral tools.

I believe the audience could experience the deep connection between the client and therapist that develops very quickly in hypnoanalysis. As the conference therapist, I found myself in a hypnotic state myself, deeply focused on the client and her experience. The ability to rapidly join with a client is enhanced by the first hypnosis – in part because it is generally so pleasant for people. But, in addition, the process we teach encourages a close pacing with the client, attending to the minute details of the experience while having a plan to create an intense emotional experience and an intense healing experience.

At the end of the conference, the client agreed to a question and answer time with the conference participants. While she expressed being nervous, she appeared composed, energized, and looked very different from when she came in. She appeared more empowered and strengthened.

These nine sessions were a good start into hypnoanalysis as a treatment for her. The client will continue therapy with a local AAMH therapist, Don Hardy-Holly.